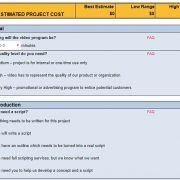 How much does a video cost? How can I estimate the cost of a custom-made video? I need a video cost calculator.

(November 2020 update: we have taken our Cost Estimator offline for the moment. It was not as popular as we had hoped and the personal touch with a precise estimate is the best way after all.)

Accurately budgeting a video project has to be left to experienced humans, but estimating the cost of a typical business video is easy with our Video Production Cost Estimator. It’s a smart spreadsheet which takes into account the length of the program, the quality level needed, the resources the client can offer and the resources the producer must provide. For simplicity of use it does not handle multiple locations, travel outside the local area, more than a dozen actors, multi-camera production or foreign language versions. We routinely provide all of these services, but the number of variables involved calls for a human to be involved in the estimate. The intent of this Estimator is to simply give you a reasonable estimate for producing the vast majority of corporate, small business, government, marketing, advertising, informational, educational and documentary videos. We keep the rate structure up-to-date for the San Francisco Bay Area.

The Estimator also gives you a high and low range of costs to cover most situations. Don’t try to pick the budget apart item-by-item. There are a number of fudge factors at work here and individual items may be estimated too high or too low, but overall the estimates work out. If you get an estimate from another company that’s well beyond the price range of this tool, make sure you understand why.

The question most clients ask in our first conversation is, “How much will this video cost?” One of the first questions we ask the client during a pre-production meeting is, “What is your budget for this video production?” And it becomes a chicken-and-egg thing.

Of course the client needs to have a rough idea about the cost of video production before they decide to have a video produced, but prices can range from free (if your neighbor’s high-school kid does it as a school project) to millions of dollars (if Francis Ford Coppola does it.) Business videos for marketing, advertising, instructional and educational uses fall well in between, but if you ask for prices, you’ll always hear, “It depends…”

Some video production companies give a per-minute estimate, but this works only for cookie-cutter videos where they shoehorn your project into one of their templates. A per-minute estimate does not work for custom-produced work. The length of a program usually plays a minor role in its cost. A 30-second Superbowl commercial can cost hundreds of thousands of dollars to produce in spite of its short length.

Dozens of other factors influence the cost of a video:

Each of these points is in turn dependent on the level of quality you seek and what the cost of failure would be. Quality level depends on the purpose of the video (for internal training or to advertise your product?) and the number of people who will see it (one-time use for a group of six, or thousands of people over the next five years?) And what if the cameraman comes back with gorgeous footage, but no sound? Not a problem if the program is about desert landscapes, but not acceptable if the video covers an important town hall meeting.

Take the question “How many people will it take to shoot this?” Of course the lowest denominator is a one-man-band who does it all. The cost is low, but the price may be high. It takes one person a long time to bring all the equipment into the building, and even longer to set up. The lighting may be a bit harsh because the camera person didn’t have anyone to pre-light on. Sound will be OK only if the single on-camera subject is seated still and/or there’s no interference on the wireless microphone. Is that OK if we’re shooting your company’s CEO and it took you a month to get them to put this project on their calendar? Of course they can only spare ten minutes for it, so there’s no chance of a re-shoot or even multiple takes!

Besides an audio person and lighting people, you may want a TelePrompter on-hand to help your subject deliver your message. That’s another person and a bunch of equipment. And how about makeup? In 1960 Richard Nixon lost a televised debate to John F. Kennedy because Nixon appeared sickly and sweaty. Does anyone need to meet the next interviewee out in the hall so that they don’t knock on the door while we’re recording the previous interview? That’s a Production Assistant. Does anyone need to ask the questions during an interview? Perhaps the Producer. Who chooses the next thing to shoot? Director. Who changes the plan when a situation changes? Director again. How do we feed the dozen people who are now on the crew? Client, Producer or Caterer. Why do feature films credit hundreds of people? Because they were all necessary for the production to succeed.

So how can you estimate?

Experience is the magic ingredient which helps us make accurate estimates by knowing which elements are essential, which are nice to have and which are a waste of resources. Of course we’d want to discuss your project, but we’ve already seen what goes well, where the trouble spots are and how to avoid them. The Estimator is based on typical scenarios which cover 90% of what we do, so it is an excellent starting point for any discussion.

Do you find this Estimator useful? We welcome your feedback.