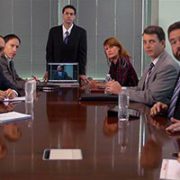 Wrap your brain around this one: eIMAGE associate Daniel Gamburg directed a project for Einstein Films (which Daniel is a partner in) for their client Serena Software Inc. Andy Linda was behind camera.

In an awkward position, waiting for the director and actors.

“Doug Serena, CIO” is a video series destined to go viral. Written by Einstein Films partners Terry Gault and Daniel Gamburg, it is a spoof on the high-pressure world of a corporate Chief Information Officer, Doug Serena. Daniel used his extensive theater background to direct a team of Bay Area actors (including partner Terry Gault) in the five-episode series. It was shot over three days in the Serena Software headquarters in Foster City, CA.

With a very limited budget we rented a Panasonic AG-AF105A Micro Four Thirds camcorder in order to get a shallower depth-of-field. Other than that we kept the budget under control by keeping the crew small (director, camera, lighting and audio) and our equipment list minimal. All lighting was with our in-house equipment. The craziest moments were when we were shooting the opening scene in a narrow cubicle hallway. It’s a fast walking shot of the main characters. We of course could not afford a Steadicam and the hallway was narrow, so we shot it with an improvised dolly by commandeering my bicycle. With a bit of post-production stabilization the results are great.

Bicycle-cam in a narrow hallway.

Post-production was done by Daniel Gamburg in his Los Angeles studio.