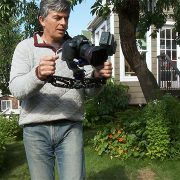 We are in the business of making motion pictures. The essence of that job is twofold: making pictures and making motion. Sometimes the subject moves and we have to follow it. Other times the subject is stationary and we have to introduce motion. Nothing will help us more with either job than our new gyroscopically stabilized camera gimbal, a mount for the camera which holds it steady even when the camera operator moves around.

You may be familiar with the name “Steadicam”. It was a wonder of engineering for the film business when it came out in the 1970s, but this piece of expensive equipment — still in use — is all mechanical: springs, counterweights and balance. Forty years later we have a miniature, digital, electro-mechanical alternative which does the same job for video production at a tiny fraction of the price.

Don’t let its size fool you. It’s actually a very sophisticated piece of equipment and as such it called for some careful calibration when we got it. But now it’s locked in and within three minutes of arriving on set it’s out of the box and ready to go.

As you can see from these demos, with this stabilizer I can become a human crane and a dolly. No tracks to lay, no slider rails to get in the shot. Shooting with this can be faster than setting up a tripod. For now I’ve been using our Canon 5D camera on the gimbal, but I have my sights set on the Sony A7s Mark II so that we can match the image quality and 4k resolution of our new Sony FS7 video camera.

So now we have a jib, a six-foot slider and a gyro gimbal in-house. Our 4k video production is truly in motion!