for Business, Broadcast and Government

Almost any event deserves to be recorded on video. After all, why was it organized in the first place? Is it an event that teaches the audience something? That can become an educational video. Was the event newsworthy? Promote it as such with a video press release. Is the event where people from far away get together? It’s a great opportunity to gather their collective wisdom in interviews or testimonials and make that into a promotional or marketing video. Document the event to promote it for next year. The reasons to hire an event video production company are many. Here are some examples of what eImage produced: 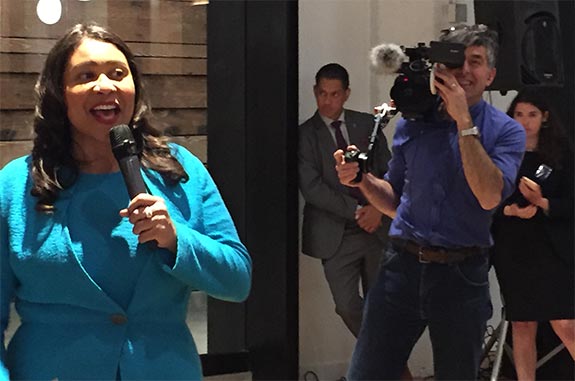 Celebrations, such as a fundraising gathering for a political party. Celebrations of one family’s colorful life for future generations. Celebrations of a successful business year and a reward for star sales people. All of these were enhanced with eImage’s event video production.

We shoot and edit news, whether for the evening news on KTVU, KQED, KTSF, C-SPAN, Fuji TV (Japan) or RAI (Italy). We’ve shot newsmagazines for FX Television, CBS distribution, and corporations such as American President Lines, Raychem and PG&E. We keep Grocery Outlet customers informed through videos posted on social media and we shoot special events such as Riordan High School’s participation in the Giants World Series Parade in 2012. When OnePlus released a new phone simultaneously in NY and SF, eImage was their news video production company in San Francisco.

eImage has been involved in documentation videos as well. We documented the devastation of the Oakland Hills Firestorm in 1991; we even documented a railroad bridge being built in 12 hours in order for a freight train to pass over it with no delay. And we’ve produced a feature-length PBS documentary about an artist visiting the USSR, birthplace of her ancestors, before that country fell apart.

The Archbishop Riordan High School marching band got to play at the Giants World Series Parade in 2012. They called eImage the night before and got a series of 2-minute, 4-minute and 6-minute programs two days later.

This was a political event, but a corporate party is the same thing. A single cameraperson can handle most events like this. They’re fun to capture and edit; we get into the celebratory spirit of the event!

Even a corporate training event can look exciting in a promotional video. Andy Linda shot this in Rome with a local sound/lighting crew.

Video newsmagazines were all the rage in the late 1990s and eImage worked on a number of them, including programs for PG&E, APL and Raychem. Two of these companies no longer exist and our equipment, experience and capabilities are light years ahead of what they were back then, but that’s what happens when you’re in business for decades.

Video Production for All Occasions

eImage’s event video production promoted events such as a training event for Hewlett Packard which increased next year’s participation. We’ve produced multi-camera training videos to teach people how to train their dogs. We’ve covered training events for the California Judicial Council that taught trial lawyers how to present their cases; training that can now be accessed over and over again.

as posted on Google

“eIMAGE created a charming, endearing party video that made me actually laugh out loud at moments. The kind of video that makes you like your friends a little more just because they seem so *likeable.*”

as posted on Google

“eIMAGE created a charming, endearing party video that made me actually laugh out loud at moments. The kind of video that makes you like your friends a little more just because they seem so *likeable.*”

Videos can promote, market, inform, educate, and save for posterity. eImage has plenty of experience with event video production, news programming and video documentation of all kinds.