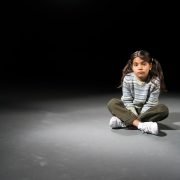 We just produced a series of Public Service Announcement videos for the San Francisco Department on the Status of Women, promoting resources to combat domestic violence. The client wrote two powerful scripts. The first was a direct-to-camera address by a number of people, a testimonial that “I am a domestic violence survivor.”  This put a human face on the problem and showed that anyone can be a victim. The second scenario was that of a child recounting how he or she lost a mother to domestic violence.

There were actually three scenes to shoot. The child scene was done by one actor in English and another actress in Spanish. Both children were excellent. Our producer Angela Gamburg took over the directing because of her softer touch with kids.

The scene with adult faces was edited with a morphing effect; a great chance to use this currently popular, cutting-edge effect. All three PSAs will air on broadcast television throughout the Bay Area. Greg Peterson was behind camera, Donovan Gates was in charge of lighting. We shot at City Stage in San Francisco.

Actress for the Spanish version of a PSA.