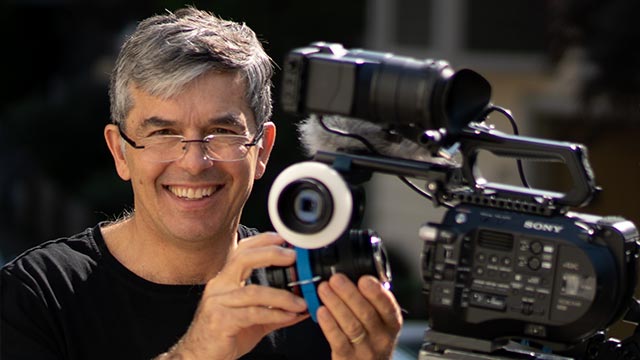 Andy Linda is a seasoned writer/director/cameraman/editor, working mainly on documentary and business-oriented projects. He has been making film and video programs professionally since 1979 with his first full-time job as a television news cameraman and editor.

Education and Early Work
After receiving his Master of Fine Arts degree in film and television production from UCLA in 1982, Andy worked in the corporate video environment of Mattel Toys. Later he joined an independent production company in Los Angeles where he began the transformation from camerawork and editing to directing and producing.

Experience
Andy has an intimate, practical understanding of every detail of video production. This enables him to work in a most efficient and creative way. Whether leading a production team as a director or working solo as a cameraman or editor, he consistently produces work of highest quality and integrity.

In 1990 Angela Gamburg joined Andy’s team both as a producer and as Andy’s wife. Since then the family business thrives, fueled by consistent customer satisfaction.

All this boils down to a shelf full of completed projects: a feature-length documentary (shot in Russia) for PBS; television news for a number of local, national and overseas TV networks; newsmagazines (Andy shot some episodes in Japan, Korea, China and Hong Kong) for Raychem Corporation, American President Lines and PG&E a winery visitors’ center program (full Blu-ray High Definition DVD with 5.1-channel Surround Sound); a dog training video; a Buddhist prayer instruction; a fundraising video for the Masons; a motivational series for Hewlett Packard; a sales program for Wells Fargo Bank; step-by-step instructional program for a medical laboratory; instructional and marketing programs for the State of California; a new employee orientation for the California Judicial Council; a 7-year series of programs for California’s high school students… the list goes on and on, spanning almost 40 years of work.

Andy was born in the Czech Republic and immigrated to the US with his parents when he was eleven years old. His teenage and early college years were spent in Wisconsin. He came to California for graduate school and has lived in San Francisco for over thirty years.