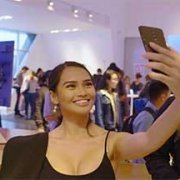 Not all of our video projects have a long shelf life. On May 21st, Opus 1 introduced their +6 Android phone. They needed to generate as much buzz as possible, so they staged kickoff events in San Francisco and New York. eIMAGE covered the San Francisco event.

For the most part it was a hand-held news-like coverage of crowds of eager techies waiting to get their hands on the first +6 units. But we used creative angles and fun camera moves to echo the excitement of the multitude. Since the client (a Pennsylvania-based ad agency) also wanted timelapse footage, we brought a second camera and set it up in a number of locations throughout the evening.

The footage had to be delivered immediately: over the Web as a proxy the same night and as a hard drive with the full 4k footage via next-day FedEx. The ad agency edited and posted it within 48 hours.

What delighted us about the finished video is that our footage from San Francisco made about 70% of the final video. We normally like to be collaborative rather than competitive, but we relished the fact that the editor liked our footage more than what he got from the New York crew.

It was a quick, one-afternoon video shoot and by now the program is hard to find online. We have it here. So it goes in this fast-paced world!

What Makes One a Freelancer?
Scroll to top