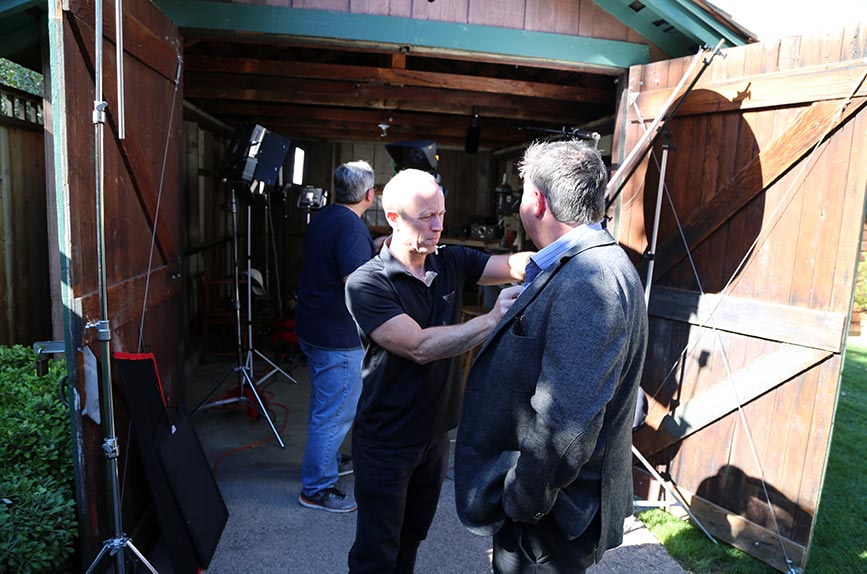 We don’t blog about our most current video project. We certainly never post anything about a program that has not yet been released by our client. And then things get forgotten. That’s why I’m revisiting a project on its 3-year anniversary.

On November 1, 2015, the Hewlett Packard Company split into two. There was a big celebration and a prominent moment was when the president of HP Inc., Dion Weisler, appeared on a 4-sided video screen suspended high in the banquet tent. He was speaking from the famous Bill Hewlett and Dave Packard garage where the company started.

I directed Dion Weisler in this program and edited the video. In fact, I directed him in countless other, lower-profile programs over a five-year period. He’s a fun, easy-going guy, but like any powerful CEO, he’s always short on time and needs to be handled respectfully. That was one of the areas where HP project managers had full confidence in my abilities. I never let them down.

In my mind, the CEO deserves full respect, but also needs direction and honest feedback. So does the General Counsel (John Schultz), the Chief Marketing Officer (Antonio Neri), all of the VPs, and so on, down the corporate ladder to the lowest-level junior engineer and legal department intern. When I work for a client, their mission is my mission; all of their people and I pull in the same direction. That means having to respect each other without being afraid to do what needs to be done.

Not everyone gets the nuances right. Dion Weisler speaks with an Australian accent, so he pronounces HP as Hey-ch-pee. A very self-confident but inexperienced director stopped him twice during a taping to instruct him how to pronounce the name of the company. On the third take Dion made it clear that THIS IS THE TAKE THEY WILL GO WITH. The director didn’t last the rest of the week at HP.

The final Day One video is here. Don’t miss the end of this compilation where you see a snippet of the shoot and then the final projection.

Land of the Giants

A Tale of Two Websites
Scroll to top